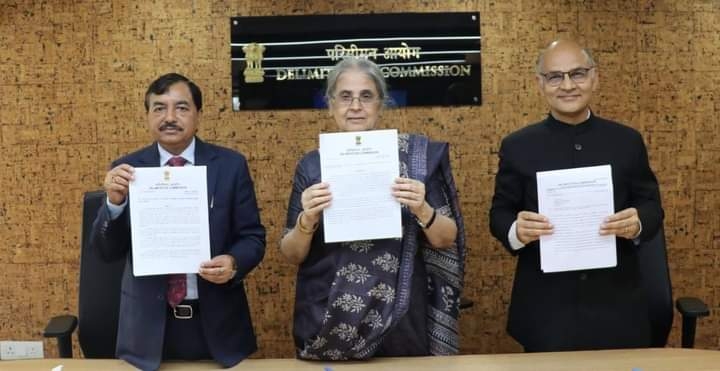 The commission submitted the delimitation order to the Election Commission of India.

For the first time, nine Assembly Constituencies (ACs) have been reserved for the Scheduled Tribes, out of which, six are in the Jammu region and three in Kashmir. The constitution of the erstwhile Jammu and Kashmir state had no provision for the reservation of seats for Scheduled Tribes in the Legislative Assembly.

As per the final Delimitation Order, out of the 90 Assembly Constituencies in the region, 43 will be part of the Jammu region and 47 for the Kashmir region keeping in view the provisions of Section 9(1)(a) of the Delimitation Act, 2002 and Section 60(2)(b) of Jammu & Kashmir Reorganisation Act, 2019, the Delimitation order said.

The six new Assembly constituencies in the Jammu region are expected to be carved out from Rajouri, Doda, Udhampur, Kishtwar, Kathua, and Samba districts.

The one new seat for the Kashmir Valley would reportedly be carved out from the Kupwara district.

As of now, there are 46 seats in the Kashmir region and 37 seats are in the Jammu division.

The Commission also said that about the relevant provisions of the Constitution (Article 330 and Article 332) and sub-sections (6) and (7) of Section 14 of the Jammu and Kashmir Reorganisation Act 2019, the number of seats to be reserved for the Scheduled Castes (SCs) and Scheduled Tribes (STs) in the Legislative Assembly of the Union Territory of Jammu and Kashmir was worked out based on 2011 Census. Accordingly, the Delimitation Commission has reserved nine ACs for STs for the first time and seven for SCs.

In addition to these, there were many representations about shifting of Tehsils from one AC to another and some of them which Commission found logical were accepted, such as shifting of Tehsil Srigufwara from Pahalgam-AC to Bijbehara-AC, shifting of Kwarhama and Kunzar Tehsils to Gulmarg-AC and redrawing Wagoora-Kreeri-AC having Kareeri and Khoie tehsils and part of Wagoora and Tangmarg tehsils, shifting of Darhal Tehsil from Budhal-AC to Thannamandi-AC. Additionally, there were some requests for minor changes in the territorial jurisdiction of proposed ACs, which were thoroughly analyzed in the Commission, and a few of them, which were logical, have been incorporated into the final Order.

The Delimitation Commission was constituted by the Centre on March 6, 2020, in the exercise of powers conferred by Section 3 of the Delimitation Act, 2002 (33 of 2002), for the delimitation of Assembly and Parliamentary Constituencies in the Union Territory of Jammu & Kashmir.

The Commission associated in its work, five members of the Lok Sabha elected from the UT of Jammu and Kashmir. These Associate Members were nominated by the Lok Sabha Speaker.