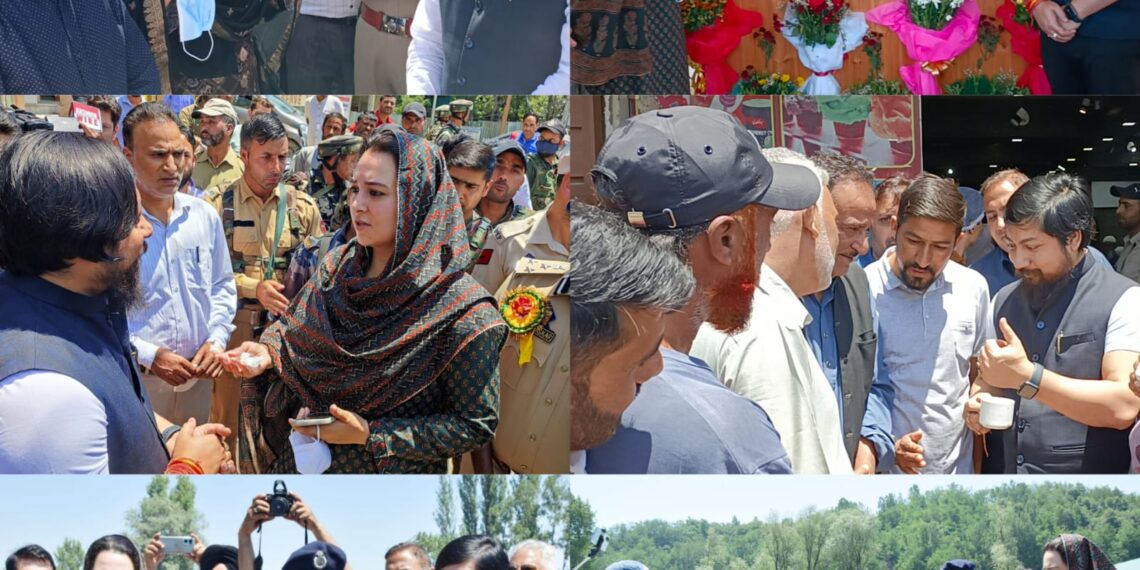 Baramulla, June 15: Union Minister of State for Home Affairs Nisith Pramanik today said concrete measures have been taken to ensure the rehabilitation of migrants so that they live in their homeland with peace and harmony.

The Minister made these remarks while inspecting Transit Accommodation Camp at Khawjabagh Baramulla. He took a first-hand appraisal of its construction work. He was accompanied by DIG North Kashmir Uday Baskar, Deputy Commissioner Baramulla Dr. Syed Sehrish Asgar, SSP Baramulla Rayees Mohammad, and other senior functionaries of the administration.

The Minister said that time has come when the people of different faiths and beliefs live with peace and prosperity. He said that unity in diversity as envisaged in the ‘Azadi ka Amrut Mahotsav” initiative, is the only unifying factor for a strong nation.

Pertinent to mention that Union MoS was on a two-day visit to Baramulla district as part of the Union Government’s special public outreach program which aims to evoke feedback from different stakeholders besides listening to their developmental aspirations and other concerns.

Earlier, the Minister also presided over a special Yoga Demonstration at Showkat Ali Indoor Sports Stadium Baramulla wherein students from different educational institutions participated. He also inaugurated U-19 Cricket Tournament in which about 20 cricket teams from across the district will participate.

After carrying out the sports activities, the Minister asserted that the mission of ‘New India’ as conceptualized by the Prime Minister, can be achieved through the nationwide movement of Fit India, besides urging youth to join hands to realize the ambition. He said that the youth of Kashmir have immense potential to contribute to nation-building and there is a need to provide appropriate platforms for harnessing it in a right and constructive way.

Reiterating the government’s commitment to empowering youth using various youth engagement activities, the minister said that various programs are in pipeline which will enable our youth to perform progressively. He also said that the future of every nation rests on its youth and they need to identify their role in the upliftment of the nation.

While enlisting various interventions taken by the present dispensation, Shri Pramanik said that the government is committed to providing all facilities including sophisticated infrastructure in Jammu and Kashmir for sports-related activities so that the youth are engaged in sports and build their careers in it.

Later, the MoS laid the foundation stone of Residential Apartments (2BHK) for BDCs at Veerwan Baramulla being established at an estimated cost of Rs. 633.44 lacs which has been highly applauded by PRIs and other concerned stakeholders.

The Minister also paid a surprise visit to a local tea shop where he took a cup of tea along with some senior officers. The move was taken as an austerity measure to foster and promote the friendly interaction between Govt and the general public besides bridging the gap between the two.