Chhangte is quick and has good qualities with the ball: Viking FK head coach 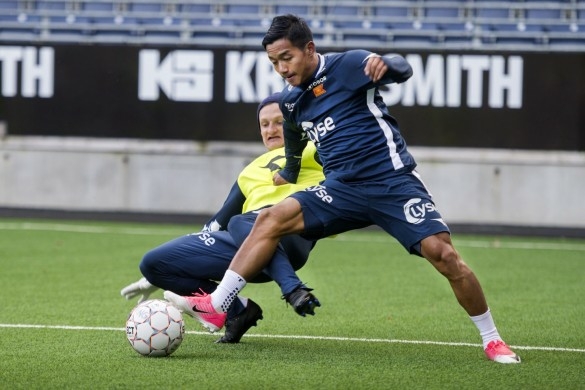 Mumbai: En route to following the footsteps of the likes of Gurpreet Singh Sandhu, Lallianzuala Chhangte seems to be impressing the Viking FK management, with whom he is currently on a trial.

The 21-year-old appeared for his first training session with the first team squad on 11th February 2019, in Norway’s Jattavagen. The weather surrounding the session was a stark contrast to which the Mizo lad has been accustomed to in India.

According to Norweign publication, Stavanger Aftenblad, the India international said, “It’s amazing to be here. The reception has been great.” Currently plying his trade for Indian Super League outfit Delhi Dynamos, the youngster was the only player to have arrived for practice in shorts, with wind, sunshine, and snow in the background.

Observing the pacy winger in training, Viking FK gaffer Bjarne Berntsen said, “He is quick and has good qualities with the ball. He’s skilled, has good balance and you can tell he is a good player. It’s exciting to have him here.”

The Norwegian top-tier side wanted the left winger for 10 days atleast, so that enough time was given to evaluate the player before making a decision to sign. But parent club Dynamos need the DSK Shivajians youth product for their upcoming crunch league encounter against Bengaluru FC.

Currently, in pre-season, the club won the second division last season, and were promoted to the top-tier Eliteserien. They will kick-off their campaign on 31st Match 2019, at home to Kristiansund.

The difference between playing in Dynamos’ home ground and in Norway will be the grass. In the European nation, the attacker will have to play on artificial grass. About this, Chhangte said, “I am used to it, even though we play on natural grass in Dynamos.”

When asked about the difference in style between Viking FK and Dynamos, he said, “It is quite similar. The way they play the ball, is that they want it on the ground.

They play fast football in the ground, with the wingers moving alongside. I really enjoyed the training.”

For the third youngest goalscorer for the Indian national team, this is a pretty big move, to leave the comfort of his home country, and to try his luck in a foreign country with alien weather conditions. “It would be a huge step for an Indian player to go to Europe to play. I don’t know what the future holds, I have not signed with any teams in India. Let’s see what will happen after this,” said the former NorthEast United player.