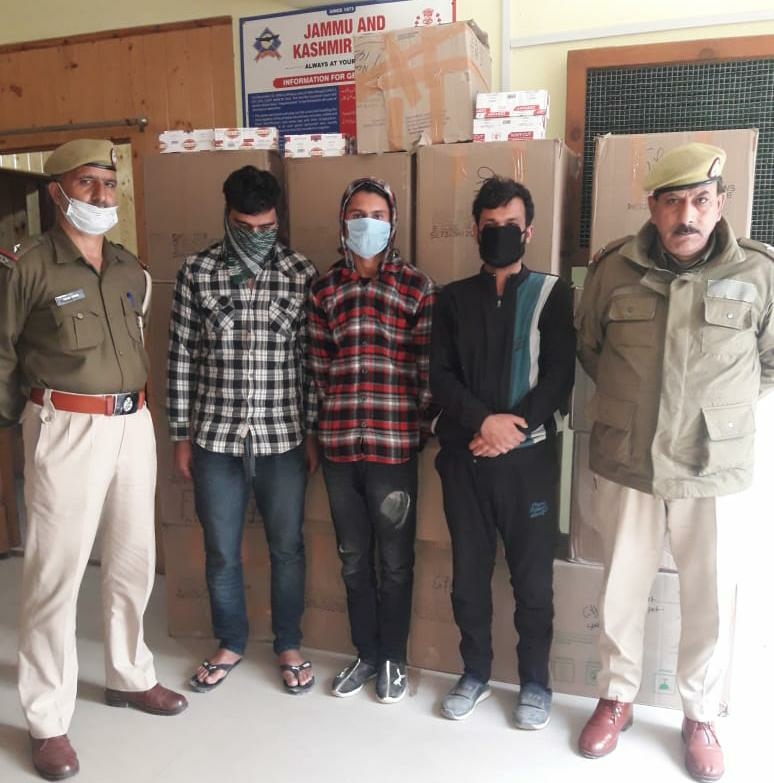 Srinagar: Police in Srinagar Saturday said it has solved the case pertaining to a burglary that took place in the intervening night of 17 and 18 October in Bemina by arresting three persons and recovering the stolen property worth Rs 18 lakh.

A police spokesperson said that on October 18, PS Batamaloo received a written complaint from Parvaiz Ahmad Bhat resident of Iqbal Abad Batamaloo stating that some unknown burglars broke into his warehouse located at Iqbal Abad opposite Degree College Bemina during the intervening night of 17 and 18 October and stole different brands of cigarettes worth lacs of rupees from the warehouse.

Accordingly, a case FIR No 145/2020 under relevant sections of law was registered and investigation was set into motion.

During the course of investigation, the scene of crime was inspected and statements of witnesses were recorded.

Besides, using the modern gadgets of investigation, a suspect identified as Muzaffar Ahmad Dar resident of Hanjivera Reshipora Pattan was called for questioning.

During questioning, the suspect revealed his involvement and his two accomplices who have been identified as Imran Hussain Mir resident of Kakarpora Mirgund Pattan Baramulla and Gulshan Abass @Hashim @Lala resident of Gund Hassibhat Parimpora Srinagar.

He further revealed that his accomplices conducted reconnaissance of the warehouse earlier in the day and accordingly planned the burglary.

On his disclosure, Srinagar police raided different locations and were able to arrest one of his accomplices Imran Hussain Mir while his second accomplice is still at large.

During further investigation officers also learnt that the arrested duo had a deal with a wholesale shopkeeper identified as Manzoor Ahmad Khanday son of Abdul Gaffar Khanday resident of Narabal Ghat and have sold all the stolen items to him.

Accordingly, a team of Srinagar Police raided the shop and recovered the stolen property worth about 18 lacs.

The investigation is going on and their involvement in other similar nature of cases is also being investigated.