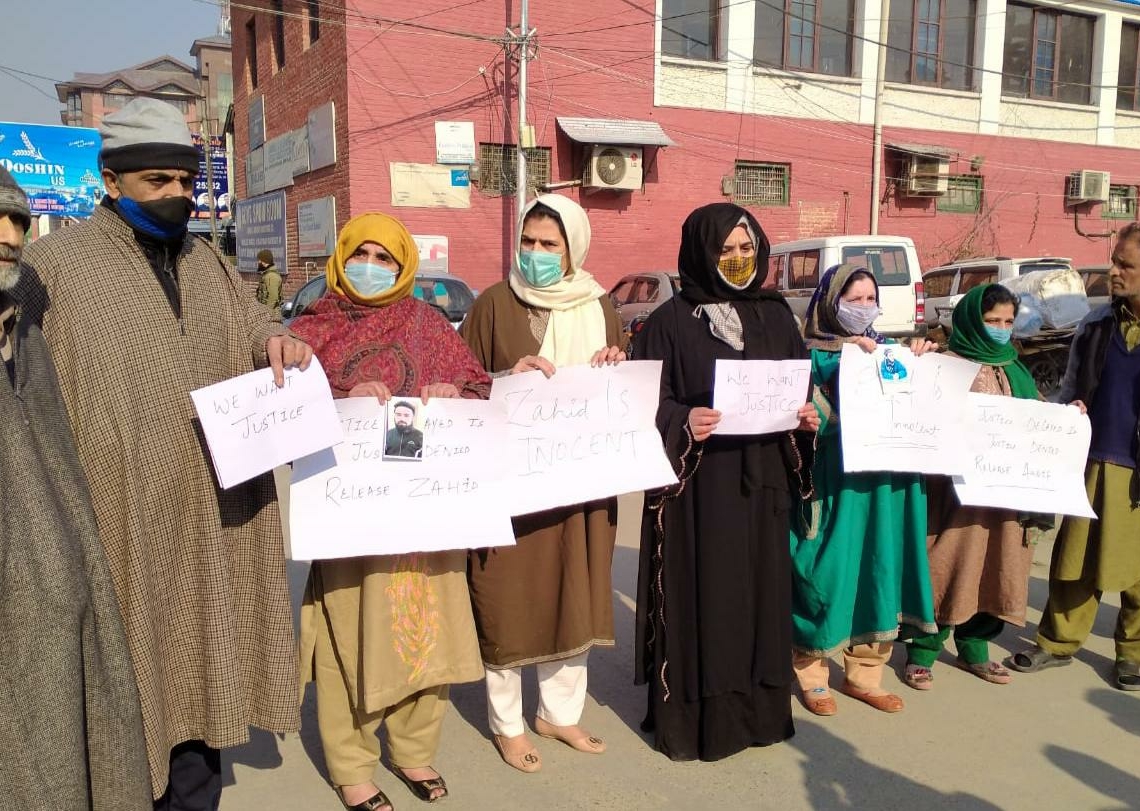 Srinagar: The family members of two of the Srinagar trio who have been arrested in connection with the murder of Advocate Babar Qadri Friday vouched for their innocence.

Pertinently, police have arrested Srinagar trio in connection with the murder of Advocate Babar Qadri. They have been identified as Asif Bhat of Rehmania Colony Srinagar, Shahid Mir of Khanyar Srinagar, and Zahid Khan, a resident of Nowhatta Srinagar.

The family members who emerged in Press Enclave Srinagar told Reporters that Zahid and Asif have been “falsely implicated”.

The claimed that police “didn’t arrest them as is being claimed but when police were looking for them, they themselves presented them before the police.”

“CCTV cameras are proof to this fact that Zahid was present in his Khanyar based shop at the time of murder. We were not allowed to meet them after their detention. We saw them after 45 days when police presented them before the court of law. Zahid was limping. He has been brutally interrogated,” Zahid’s sister said.

“The brother-in-law of the slain Advocate Babar Qadri is a DySP in Police Department and he has conducted investigation in a closed room,” she said.

“Both Zahid and Asif are innocent and are being implicated,” she said and sought intervention of the higher officers.

“We want justice and a fair probe into the murder of Advocate Babar Qadri. Asif and Zahid are innocent and have nothing to with the murder,” the family members said according to news agency KNT.

Pertinently, police has claimed that it arrested five persons including two detenues in connection with the murder of Qadri.

Advocate Qadri was shot dead on September 24 this year at his residence in Hawal area of Srinagar by two men. These men who masqueraded as clients told Qadri that they want to discuss with him a matter, but fired at Qadri at point blank range. He was shifted to hospital where doctors declared him brought dead.

Shortly after the killing, a formal FIR vide number 62/2020 under section 302, 7/27 Arms Act and 16/18 UAPA was registered at police station Lal Bazar while on the directions of Inspector General of Police Kashmir Zone Vijay Kumar, a Special Investigation Team was constituted under SP Hazratbal to probe the murder of Qadri.

Besides Srinagar trio police have arrested two detunes at Srinagar Central Jail who have been identified as Muneer War alias Qari of Hatmulla Kupwara and Tawseef Shah son of Parimpora, Srinagar.

The arrested trio from Srinagar have been sent to judicial remand to Central Jail, Srinagar till December 26 by the Court. (KNT)

MBBS students protest against SKIMS for not resuming clinical classes