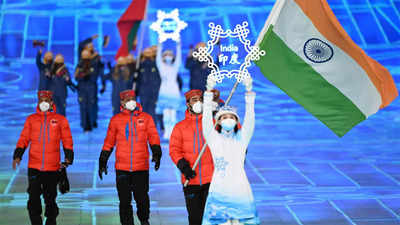 Beijing: Indian skier Arif Khan walked out with tricolour at the Bird’s Nest National Stadium during the Beijing Winter Games opening ceremony on Friday.
The opening ceremony is the culmination of preparations that were beset by the COVID-19 pandemic and criticism over human rights in China that led several countries to mount a diplomatic boycott.

Held on the first day of Spring by the Chinese calendar, the event began with a performance by dancers waving glowing green stalks meant to convey the vitality of the season, followed by an explosion of white and green fireworks that spelt the word “Spring”.

After that, the Chinese flag was passed among 56 people representing China’s different ethnic groups before the flag was raised and the national anthem performed.
India has sent a six-member Indian delegation to the Winter Olympics where Jammu and Kashmir skier Arif Khan is the only athlete from the country to have qualified this time.
Arif will be competing in Slalom and Giant Slalom events during the Games to be held from February 4 to 20.
The contingent also includes alpine coach Ludar Chand Thakur, technician Puran Chand, manager Mohammad Abbas Wani and team official Roop Chand Negi.