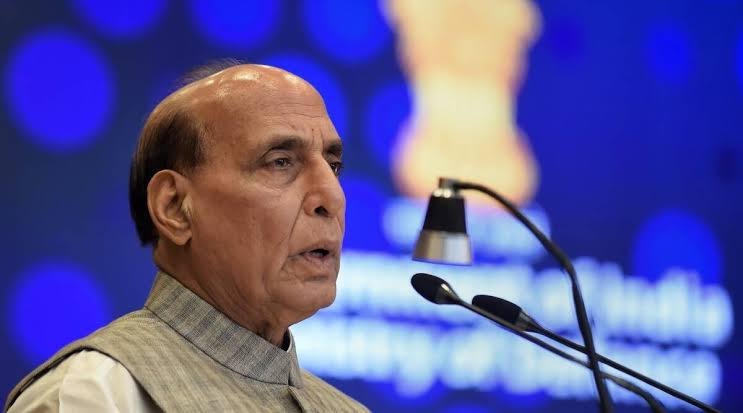 New Delhi: Defence Minister Rajnath Singh today asserted that the AGNIPATH scheme is a golden opportunity for the Indian youth to join the Armed Forces and serve their motherland.

In a statement, Rajnath Singh, who is on a two-day visit to Jammu & Kashmir, said that many youths did not get the opportunity to join the Armed Forces, as the recruitment process could not take place for the last two years. Keeping in mind the future of the youth, Shri Rajnath Singh stated that the government, under the direction of Prime Minister Shri Narendra Modi, has increased the age limit for the recruitment of Agniveers from 21 years to 23 years for the recruitment cycle of 2022.

“The relaxation of age indicates that the Government cares for our youth. Department of Military Affairs, Ministry of Defence, and the Services are committed to commencing the recruitment process at the earliest. We invite the youth to join the Armed Forces and serve the Nation through AGNIPATH,” he said.

Later, Singh attended the 9th Executive Council and 4th General Body meeting of Jawahar Institute of Mountaineering & Winter Sports (JIM&WS) at Pahalgam. In the presence of the Raksha Mantri and Lieutenant Governor Manoj Sinha, the meeting deliberated on the ways to ensure smooth functioning of the institute and early resolution of pending issues.

I in his address, Defence Minister lauded the rigorous training standards, excellent management, devotion, and technical proficiency of the trainers and instructors that have established JIM&WS as one of the leading institutes in the country. He described mountaineering and allied activities as a sign of not just physical endurance, but also mental toughness and enthusiasm.

Singh appreciated the increasing number of women participants in these activities, which once witnessed male dominance. He also acknowledged the differently-abled Divyangjans who are completing mountaineering expeditions with skill and enthusiasm. He made special mention of Indian mountaineer Arunima Sinha who became the first woman amputee to scale Mount Everest with her firm determination. It is, therefore, very important that all training programs in this institute are oversubscribed, he said.

Singh said the government’s focus on increased public-private partnership in various fields has provided a new thrust to the country’s development. “There are many technologies, expertise, and innovations in the private sector which are not available in the public sector. Collaboration with the private sector will help JIM&WS to connect the people, especially the youth, with activities such as mountaineering and ensure local prosperity,” he said.

Defence Minister exhorted the institute to further acquaint people, especially the youth, with mountaineering and winter sports through its various training programs and to infuse patriotism, courage & energy in them. He said this will not only increase the popularity of these activities but also generate employment opportunities, thereby giving a boost to the local economy. This will also increase the participation of the local community and provide an opportunity to connect with their culture, he added. The Raksha Mantri stressed that local people should not just be Sherpa, but partners in the national-cultural unity.

Singh reiterated the government’s resolve to development of border areas to bolster national security and said that institutions like JIM&WS can help in carrying forward that vision and contribute to the progress of the country. Emphasizing on the importance of environmental protection, he called upon the institutions like JIM&WS to promote eco-sensitive tourism and contribute to saving nature. He concluded his address with the hope that JIM&WS will become one of the leading institutes of the world in the coming times.

On the occasion, he also inaugurated a Col KS Mall Boulder Climbing Wall and Himalayan Museum at the Institute. JIM&WS aims to expose the youth to nature and develop their personality, character, and confidence through adventure sports.