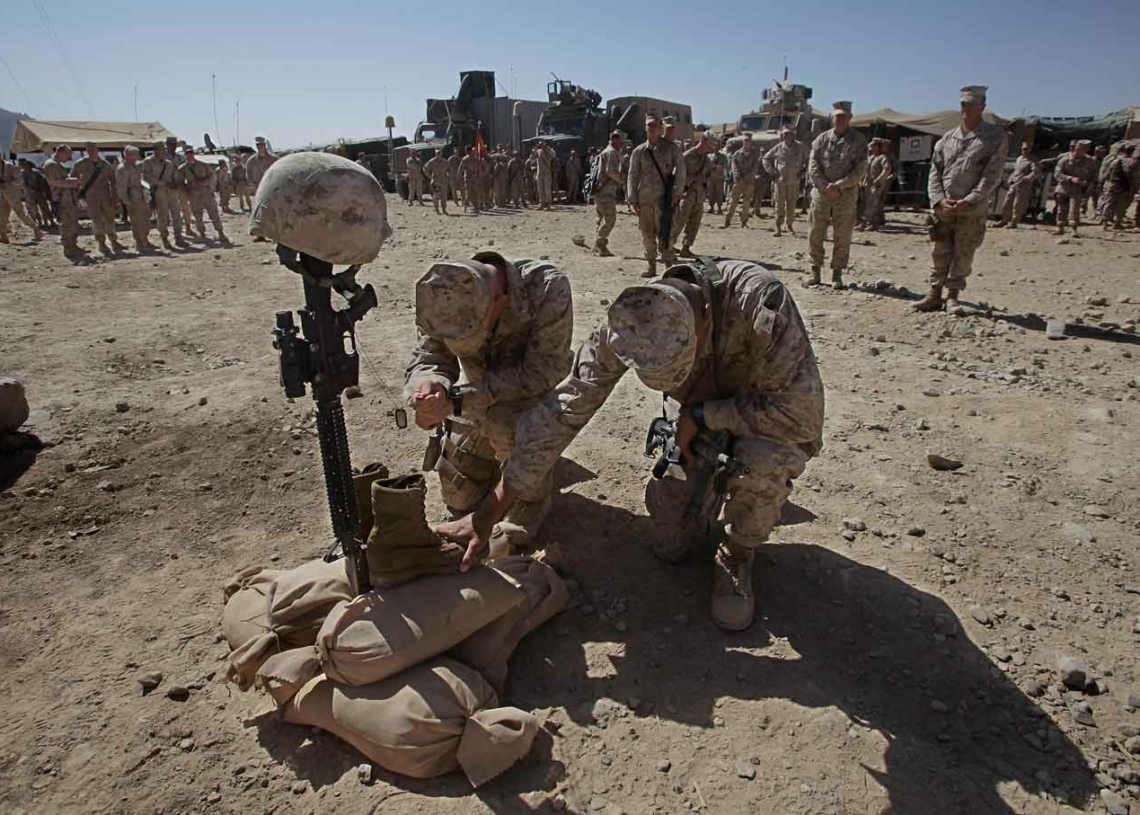 On Sunday, the protracted war in Afghanistan completed 17 years. It was on October 7, 2001 the U.S. government and its allies launched the so-called ‘Operation Freedom’ apparently to topple the Taliban regime in Kabul, following the 9/11 attacks. Yet 17 years later, America’s longest war still grinds on, despite more than $2 trillion investment and thousands of casualties.

Bearing testimony to America’s disastrous venture in Afghanistan, in the 24 hours corresponding with the 17th anniversary of its invasion, at least 54 people were killed across the war-ravaged country, including 35 Afghan security forces and 19 civilians. It is a grim reminder that the war has only got deadlier with time and the Taliban has managed to reinvent itself, belying tall claims of the U.S. generals that the insurgency was waning in Afghanistan.

It started a few weeks after the 9/11 attacks when the George Bush administration launched the so-called ‘Global War on Terror’. Bush’s defense secretary Donald Rumsfeld, flanked by Joint Chiefs Chairman Gen. Richard Myers, announced what were to be America’s longest war and the biggest disaster.

On the afternoon of Oct. 7, 2001, as the U.S. and its allies started the deadly and indiscriminate air raid in Afghanistan, Rumsfeld said the objective of the ‘campaign’ was to decimate the Taliban and al Qaeda hideouts in the country. Bush, in an address to the nation, declared the war against the Taliban and al-Qaida, vowing to “crush” them.

As of today, the war has completed 17 years, consumed thousands of lives, and cost U.S. taxpayers more than $150 billion. All this without achieving the stated objectives.

The U.S. government, prior to the 9/11 attacks, had been asking the Taliban to hand over Osama bin Laden, the ‘most-wanted terrorist’ who had previously fought alongside the U.S. forces against Soviets in Afghanistan. The Taliban had asked for evidence of his complicity in crimes and a commitment to conduct a trial in a third country.

After the 9/11 attacks, the Taliban offered to hand over bin Laden to a third country to be tried, dropping the demand for evidence of his guilt. But the Bush administration turned down the offer and launched deadly airstrikes, not even halting it when bin Laden was believed to have run away from Afghanistan, and not even halting it after he was declared dead in an air operation inside Pakistan.

So, what were the objectives of carpet bombings and the war in Afghanistan? Anand Gopal, the author of ‘No Good Men Among the Living’, which should be a required reading for every American, agrees that the top Taliban leadership had tried to surrender soon after the U.S. invasion.

“The mood at the time was that, like Bush said, “You are either with us or against us.” America’s goal was to wage a war on terror, and the fact that its enemies were trying to switch sides was something that did not mesh easily with the ideology of counterterrorism,” he told me in an interview a few years ago.

David Swanson, an American author and activist, also believes that invading Afghanistan had little or nothing to do with bin Laden or 9-11. “The motivations in 2001 were in fact related to fossil fuel pipelines, the positioning of weaponry, political posturing, geopolitical posturing, maneuvering toward an invasion of Iraq, patriotic cover for power grabs and unpopular policies at home, and profiteering from war and its expected spoils,” he wrote in an article.

The clamor for ending the “failed war” in Afghanistan has been gaining momentum in the U.S. Daniel Davis, a former Lt. Col. in the U.S. Army who retired in 2015, says the evidence that the U.S. war in Afghanistan is failing and cannot be won is “dramatic and overwhelming”, yet no leader has had the “wisdom or courage to call for a withdraw”. Journalists John Dale Grover and Jerrod Laber in an article recently said the U.S. has been “unable to build an Afghan government that is capable of providing for its own security and there is no reason to believe that will change.”

The outgoing top U.S. commander in Afghanistan General John Nicholson was very blunt in his farewell address. “It is time for this war in Afghanistan to end,” he said. John Sopko, who has served as the special inspector general of a U.S. watchdog in Afghanistan for past six years, is also disillusioned. In an interview to Canada’s Global News recently, Sopko noted that 17 years after Western nations invaded Afghanistan, the capabilities of Afghan security forces remain questionable, corruption remains endemic and rampant, and opium production continues to fuel insurgency, complicating matters.

Chukh Pezeshki, a professor at Washington State University, also believes that it is time for the American public to demand an end to this pointless war. “Our leaders in both the military and the government do not know what they are doing, and they are sending our sons and daughters to be killed because of their ignorance and avarice,” he wrote in an article.

These statements show the growing frustration among Americans that the war in Afghanistan was proving an expensive proposition and costing U.S. tax payers billions of dollars.

According to a new Pew Research Center survey, nearly half of Americans think the U.S. has failed to achieve most of its goals in Afghanistan, 17 years after the war kicked off.  The previous Pew surveys conducted in 2014 and 2015 had also reported predominately negative views of America’s longest war. In 2015, 56 percent described the war as “mostly a failure.

In December 2014, almost 13 years after the war began, President Barack Obama announced the end of so-called ‘Operation Enduring Freedom’. The operations by the U.S. military forces, both noncombat advisers and combat forces, he said, would henceforth take place under the name ‘Operation Freedom’s Sentinel’. The nomenclature changed, but the war did not.

Seventeen years down the line, almost 56.3 percent of Afghanistan’s districts are currently under government control and at least 30 percent of districts are contested, according to a recent SIGAR report. And, there have been reports recently about secret negotiations between the U.S. government and the Taliban in Qatar, which seems to suggest that the world’s biggest military has surrendered before the Taliban in Afghanistan after 17 years of futile war and bloodshed.

Today, on average, the war in Afghanistan consumes lives of 30 to 40 Afghan forces and at least 13 civilians on daily basis. There appears to be no strategy to contain violence, to prevent civilian casualties, to combat terrorism, to find a way out of this logjam.

Now there is a talk about ‘privatizing the war”. Erik Prince, the founder of notorious U.S. security company Blackwater, which came under scrutiny after its employees were accused of killing Iraqi civilians in 2007, visited Afghanistan last week to sell his proposal.

In an interview, Prince said hiring his contractors to support Afghan forces could end the war in “six months after the program is fully ramped up.” But, it drew sharp reactions from Afghan political and military leadership, including President Ashraf Ghani and Chief Executive Dr. Abdullah Abdullah. The country’s National Security Advisor Hamdullah Mohib termed the proposal “destructive and divisive.”

While the long-standing war stretches and the civilian casualties surge to a record high, sending more U.S. troops or privatizing the war cannot end the stalemate. The only way out is for the U.S. troops to go home and let Afghans take charge of their country.