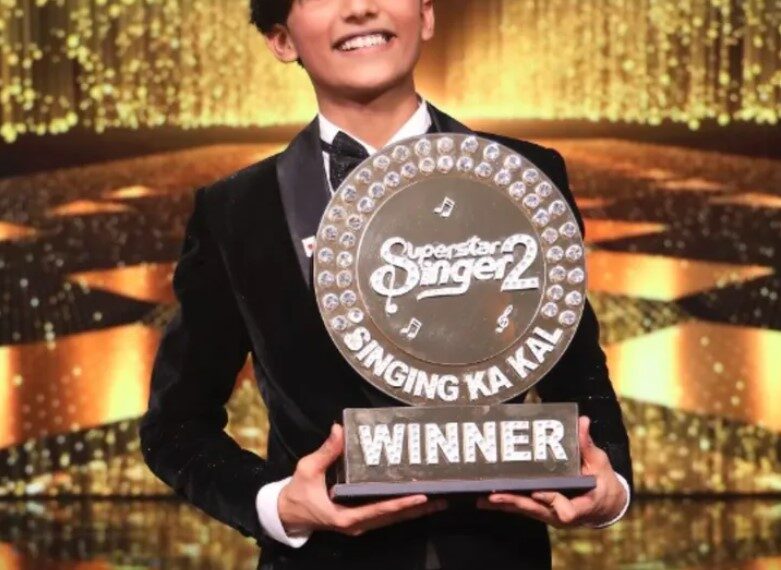 Mumbai, Sep 4: After a tough competition among the six finalists, 14-year-old Mohammad Faiz from Jodhpur turned out to be the winner of ‘Superstar Singer 2’ and lifted the trophy and a cash prize of Rs 15 lakh.

His soulful rendition of romantic tracks such as ‘Pehla Nasha’, ‘Kesariya’ and ‘Koi Mil Gaya’ not only impressed the judges but also the special guests, including Bollywood actresses of the yesteryear such as Padmini Kolhapure and Poonam Dhillon.

Mani and Sayisha were declared first and second runner-up, respectively. The show, which premiered on April 23, was judged by Alka Yagnik, Himesh Reshammiya and Javed Ali. It provided a platform to 15 contestants aged seven to 15 years to show their talent.

Music maestro Anand also graced the show as special judges for the grand finale along with him the evening also saw popular singers Shabbir Kumar, Sonu Kakkar and Bhumi Trivedi.

Apart from sizzling performance by the contestants,the fun banter by Bharti Singh and Haarsh Limbachiyaa, who were co-hosting the grand finale with Aditya Narayan had added more to the entertainment quotient of the show. Furthermore, best friends and veteran actresses Poonam and Padmini accompanied the contestant Aryananda R. Babu from Calicut to perform the famous track picturised on Poonam ‘Chori chori koi aaye’ from her 1979 film ‘Noorie’ opposite Farooq Shaikh

Winner of the show Mohammad Faiz, who was from the team of captain Arunita called ‘Arunita Ke Ajoobe’ expressed his excitement saying: “Being on ‘Superstar Singer 2’ is an achievement by itself. When I gave the auditions, never in my wildest dreams did I ever imagine that I would not only be in the TOP 6 but also win the coveted trophy. I am unable to describe this feeling in words, it’s so surreal. It still feels like a dream to me.”

He also thanked his fans and shared: “I would like to thank all the viewers and my fans i.e., Faizians who have showered me with so much love and votes. I also want to extend my gratitude to everyone who has made my journey on the show special, especially all the judges and my captain Arunita di, who has been my pillar of strength, who believed in me and guided me to make this dream of mine come true.”

Arunita was elated looking at the performance by Faiz and she commented: “I am extremely elated to see our Rockstar Faiz lift the trophy and be crowned as the winner of ‘Superstar Singer 2’.”

On the other hand, Alka praised all the top 6 contestants which included Faiz from Jodhpur, Mani from Dharamkot, Pranjal Biswas from West Bengal, Sayisha Gupta from Mohali, Aryananda R. Babu and Rituraj from Kerala.

She said: “Seeing them mature, grow and flourish throughout the season has been an experience. Everyone from the top 6 contestants have been outstanding. Faiz is a well-deserved winner, his graph on the show has been so good. He has been one of the best singers the stage has witnessed, and his determination towards music and zeal to win has made him win the coveted title.”

Himesh also congratulated the winner, saying: “Faiz has been a complete rockstar right from the beginning and has consistently given his best. I am very proud of Faiz.

Javed concluded with his best wishes for the contestants and winner: “I have personally received so many messages and calls praising the kids of the show. I am extremely proud of all the contestants, especially Faiz who is a very well-deserved winner, and I wish him all the luck for a brighter and successful future. Kudos to the whole team of ‘Superstar Singer 2’.”